The Mass of Ordination and Mass of Thanksgiving will both be held at St. Joseph's Church in Biddeford, Maine. Deacon Alex grew up attending St. Joseph’s Church. Having received his First Communion and Confirmation here, Deacon Alex began serving Mass and was inspired and encouraged by his childhood pastor, Father Renald Labarre, to consider a vocation to the priesthood at a young age. It is a great joy to return “home” to St. Joseph’s Church for these two special occasions.

History of the Church

St. Joseph’s Church in Biddeford, Maine was established as a parish on May 13, 1870 by a decree from Bishop David Bacon, first bishop of Portland. The parish was founded to meet the spiritual needs of the many French Canadians who were migrating from Quebec to the Biddeford area at the end of the 19th Century. The first building to house St. Joseph Church was a former Methodist church, located at the corners of Alfred and Bacon Streets (the present sight of the Biddeford Police Department). In 1873, having outgrown its first facility, the parish purchased land on Emery's Court (present site of the church on Elm Street). Construction of this imposing and superb neo-Gothic structure began. In 1883, this great temple dedicated to the glory of God. For almost one hundred years St. Joseph's church was the tallest building in the state of Maine.

Among the recognized treasures housed in this grand building is a classic Hook & Hastings tracker organ (c. 1880) and unique stained glass windows depicting the life of Saint Joseph, designed by the famous Mayer Studio in Munich, Germany.

At the end of the 19th Century the parish knew phenomenal growth. A parochial school was built (with 1200 students in grades K to 8 by 1896). A convent was added to house the Good Shepherd Sisters of Quebec who were teachers in the school. In 1892 the rectory was built and at the beginning of the 20th Century a high school was added, with a parish hall to follow. By 1899 the parish had grown so much that another parish was needed to serve the needs of the ever-growing presence of this French speaking community. Thus the foundation was laid for St. André’s Parish.

In 2004, and through the generous support of its parishioners and friends, the exterior of the building was restored from its steeple to its granite foundation. The interior of the church was repainted and the magnificent rose window above the choir loft was restored. A marble floor was added to the sanctuary area and the original wooden doors were copied and installed. 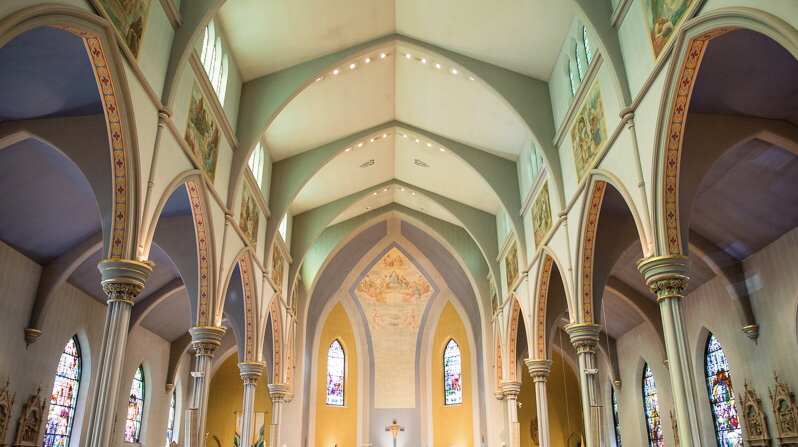